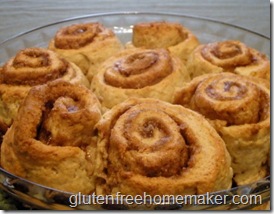 Not long ago I gave you a recipe for gluten-free cinnamon rolls that used more whole grain than my original recipe.  They were very good, but for my family, they were not as good as my previous version and therefore not their choice for Christmas morning.

In November, I tried the recipe again but divided the amount of sorghum I had used in half and replaced the other half with millet flour.  The results were terrific.  I was still using whole grain flour, but that whole grain flavor wasn’t quite so strong and my family approved.   In addition, I liked the texture slightly better.

I would have told you this before Christmas, but I forgot to write down what I had done and I wasn’t positive I remembered correctly.  I didn’t want to mess up anyone’s Christmas cinnamon rolls, but I took the chance myself and made them again do what I thought I had done the last time.  So now I’m sure.

I’m not going to repost the recipe, but I will make a note of the change in the whole-grain recipe.  I’m sorry I’m too late for  you to use this for Christmas or even New Year’s Day, but maybe for Valentine’s Day or as a special birthday treat.  Sometimes I make them just because.  Just because they’re so good and my family loves them.

I really appreciate those of you who have left comments or emailed me about the cinnamon roll recipes.    Discovering that recipe was such a big deal for our family, and I’m glad I can pass it on for others to enjoy.