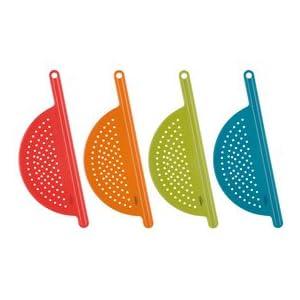 I’ve had so many other things to write about, it’s been a while since I’ve done a post in this series.  The pot strainer is a simple tool that doesn’t take up much space, and I find it very useful.

A pot strainer comes in handy any time you want to strain something, but I mostly use it for staining meat that I have browned in a skillet.  When you’re done cooking there is fat and liquid that you usually want to strain off.  A colander is a practical means of doing this, but I usually prefer a hand held strainer.

What It Is
Pot strainers can be made of metal or plastic.  I have a plastic one that I bought from Pampered Chef.  The strainers usually have a handle on one end and a center area that is rounded and has holes.  You hold the strainer over one side of your pot or skillet and then tilt the pot to pour the liquid into a bowl or other container.  The strainer holds the food in the pot/skillet while the holes allow the liquid to pour through.

Second, because a strainer is smaller than a colander, clean up is easier.  Who doesn’t like easier cleanup?

You can find an assortment of pot strainers at Amazon (that is an affiliate link, meaning I get a very small commission on any sales purchased through that link).