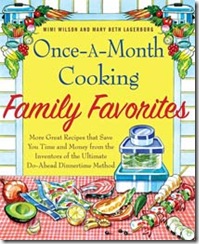 This giveaway is now closed.

The other week I received the new Once a Month Cooking Family Favorites cookbook.  I first heard about the idea of once a month cooking years ago.  It always interested me, but I was never willing to bite the bullet and do that one big cooking day.  After reading this cookbook, I’m convinced I should give it a try.
Let me explain what once a month cooking actually means.  It’s about having dinner meals planned, prepared (usually partially), and frozen.  Obviously, some cooking has to take place later because we don’t eat frozen food.  Some foods don’t freeze well such as pasta or rice, so those parts of the meal are cooked the day they are to be eaten.  The main dish, however, is cooked and ready to be reheated, or prepared and assembled, ready to be cooked.

This cookbook provides a number of different menu plans including a two-week gluten-free cycle.  For each cycle you are provided with a menu chart  that shows you at a glance what meals you have frozen, how many people each recipe feeds, ingredients that are needed at serving time, the type of meat used and the cooking method.  There is also a column for “serve with” notes.

Next, you are given a pantry list that includes things you probably have on hand, such as herbs and spices, butter and eggs, and freezing supplies.  Any items you don’t have should be added to the shopping list, which is also provided.

Instructions for assembly are given which take you step by step through food preparation (chopping, browning meat, etc.) to preparing and freezing the individual recipes.

I didn’t have as much time as I had expected to try the recipes, but I did try a few.  Aside from the gluten-free cycle,  I found that many of the recipes can be easily made gluten free by substituting one or two ingredients, and some are naturally gluten free.

I thought the gluten free cycle had too many chicken recipes (7 out of 14), but like I said, there are lots of other options in this book.  The lists and instructions are done by cycles, but with a little extra planning you could create you own cycle, or omit a few recipes that don’t appeal or can’t be made gluten free.  I know I’d be happy with 25 frozen meals.

The recipes I tried turned out very well and everyone liked them.  The first two were not part of the gluten-free cycle, but the roast chicken was.  I did not freeze the dinners, but used the cookbook like any other cookbook.  The recipes were easy to make and delicious. 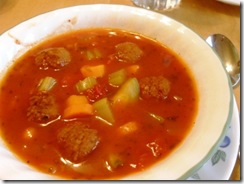 The first one I tried was Vegetable Soup with Meatballs.  I want to mention that I found frozen turkey meatballs at Aldi’s grocery store.  It was the Fit & Active brand they carry.  The meatballs weren’t the best, but they weren’t bad either.  If you can’t find gluten free meatballs, you will have to make them from scratch. 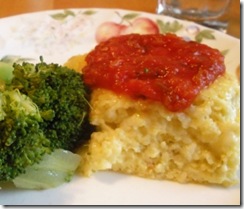 The second recipe I tried was the Southwestern Egg Casserole.  It is a meatless dish, but contained plenty of dairy.  It had lots of flavor and was very filling.  The next time I make it, though, I will cut the amount of butter in half.

Lastly, I tried the Parsley, Sage, Rosemary, and Thyme Chicken.  It turned out flavorful and moist.  It’s not unusual for me to roast a chicken with olive oil and herbs, but I particularly liked the addition of Parmesan cheese to this recipe.

I have an extra copy of Once a Month Cooking Family Favorites to give away.  If you would like to enter the giveaway, leave a comment on this post telling me if you’ve tried once a month cooking or not.  The giveaway is open to residents of the 48 contiguous United States.  It will end on Friday, October 9 at 11:00 p.m. eastern time.

You can visit the Once a Month Cooking website for tips and a free one-week cooking cycle. If you would like to purchase the book, or take a look inside, you can do so at Amazon.