A little over a year ago we were looking for a second dog. We had a collie at the time who loved other dogs and needed a playmate. I decided to look for something a little smaller than a collie and stumbled across mini Aussies on the Internet. I was a little familiar with Australian shepherds, but had decided against them in the past because they are said to be high energy dogs and can be destructive if bored or not exercised enough. But when I saw “miniature” (usually around 20-30 pounds), I decided to investigate. I figured a smaller dog would be easier to exercise, and they sounded like great family pets. I was right!

We bought Esca when he was 10 weeks old. He is a blue merle with two blue eyes and weighs 29 pounds. He was the perfect playmate for Ellie. He is a bold, lovable, ball chasing boy. By the way, my kids picked the name from a historical fiction book we had read, Eagle of the Ninth by Rosemary Sutcliff. We were so used to the name fitting the character that it wasn’t until after we were all used to it that we realized everyone else thought is was a girl’s name.

When Ellie died very unexpectedly last November, we knew we had to get another dog, and there was no question that it would be another mini Aussie. Emma was born just a couple of days before Ellie died and we soon had her picked out. We brought her home when she was 8 weeks old and she has been the perfect companion for Esca. Emma is very sweet. She is a red merle with one blue eye and one brown eye. She is almost 9 months old now and weighs 23 pounds. She is a cautious on-guard female who likes to bark at strangers. 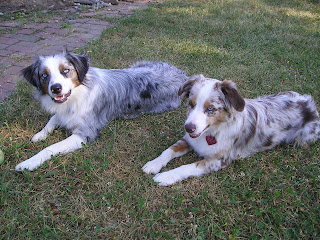 Both dogs are very family oriented. They are smart and obedient (mostly). They were both easy to house train. They are not the kind of dog who wants to run off. If they do run after something, they won’t go too far before coming back. They follow me around the house, sometimes even into the bathroom!

If you’re looking for a dog now or in the future, I would recommend checking into the mini Aussie.
Esca (left) and Emma (right)