Last week Safeway had a good sale on top round London broil ($1.99 per pound).  It was packaged in large quantities and the pack I picked up was about six pounds.  I decided to cook both steaks and freeze the extra rather than freezing one of them raw.

You can probably tell from the picture that it got overcooked.  It was still slightly pink in the middle, but I prefer it to be a darker pink.  That was, I think, the fault of my new thermometer which I had not calibrated.  It was still good, though.  Here’s how I prepare London broil.

Marinating
I works best to marinate London broil about 8 hours before cooking.  Any marinade will work, but here’s what I used.  It’s a recipe I got from my sister-in-law that I have adjusted slightly.  I should have doubled this recipe for both steaks, but didn’t and regretted it later. 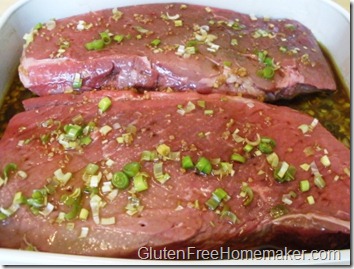 Wipe the steak with a paper towel to get rid of excess oil and avoid flare ups.  Grill the steak on high heat for about 3 minutes on each side.  After that, turn the steak over again and at about a 45 degree angle from the direction it was the first time to get the crisscross grill marks.  Reduce the heat to medium and cook approximately another 10 minutes per side.  It really depends on the thickness of your steak.  A thermometer should read 145° for medium rare.

Remove to a plate and let it sit about 10 minutes.  Slice the meat across the grain making the slices as thin as you can get them.  An electric knife works well for this.

The sliced meat it great served alone (with sides of course) or on a salad or sandwich.

What is your favorite way to eat London Broil?


For other great recipes visit these blog carnivals:

If you have a question about a recipe (especially substitutions and nutritional information), please read my FAQ page before asking the question in a comment.