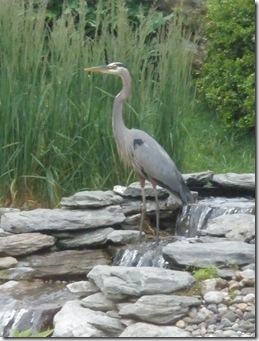 This is purely a personal post which has nothing to do with celiac disease or gluten-free living. I was so thrilled about this heron, though, I just had to tell you about it.

We bought this house four years ago and the first thing we saw was the back yard. That was all it took. The yard had so much character and a pond, which the boys thought was really cool. We’ve done a lot to the yard since then, including rebuilding the pond and adding a beautiful waterfall.

One morning last week I heard my youngest son making a commotion. He had looked out an upstairs window and saw this great blue heron standing in our waterfall. He wanted us to come see it, but he didn’t want to stop watching. This heron was really big, “scary big” as one of my boys said. We stood there amazed when someone finally said, “Get the camera!” The picture was taken from my kitchen window, and while you don’t get the full effect, I think it turned out pretty well. The bird spread its great wings and flew off shortly after I took the picture, and that was our excitement for the day. It’s nice to know that even living in a D.C. suburb, we get our share of wildlife. I’m still waiting to see one of the pileated woodpeckers that live in our neighborhood. Maybe I’ll have a picture to share one day.

I’m going out of town for a couple of days so I won’t have a Friday Foodie Fix post tomorrow. I’ll be back next week and will post the giveaway winners!