Last week I mentioned that I was travelling to Minneapolis, and now I can tell you why.  General Mills held a gluten-free summit!  The summit included ten gluten-free bloggers, Shelly Gannon, wife of former NFL quarterback Rich Gannon, Danna Korn, author and founder of GlutenFreedom.net and Raising Our Celiac Kids (ROCK), and Carol McCarthy Shilson, Executive Director of The University of Chicago Celiac Disease Center.  There were also numerous General Mills and contractor employees. 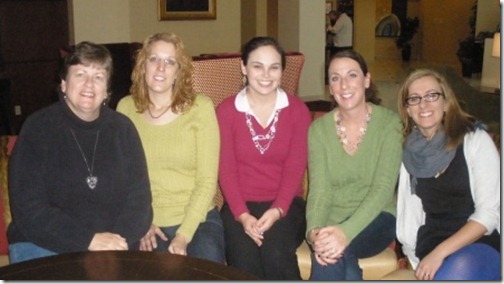 The summit was about all things gluten free, not just General Mills products, and I believe that all of us bloggers came away from the summit with the feeling that we had been heard.  Our experiences, our frustrations, our concerns, our needs, and our wants were all voiced and General Mills listened.  In fact, I think they found it very enlightening.  I’m not free to give you any specifics on General Mills’ plans, but I can say they are interested in helping and becoming involved in the gluten-free community by doing more than creating gluten-free products.  I think one small fact that really helped us believe that to be true is that the CEO of General Mills has a gluten free family member.  General Mills is a major corporation, and their honest desire to understand and get involved in the gluten-free community is a big deal, and something I am grateful for.

You might be wondering, as we were before attending, how they fed us.  Tuesday evening we enjoyed a delicious dinner at Biaggi’s Ristorante Italiano.  That’s right, an Italian restaurant!  With all the excitement I forgot to take pictures until dessert, but we were served gluten-free bread and had a full menu of gluten-free choices, including gluten-free pasta dishes and pizza.  Because of being dairy-free I went with filet mignon and vegetables which were delicious.   Here are a couple of the desserts (I had the sorbet on the left): 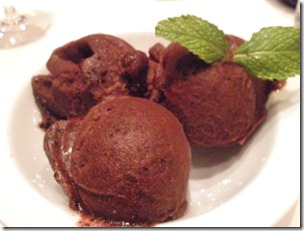 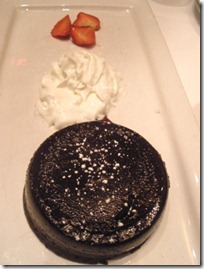 For breakfast on Wednesday, we had delicious baked goods from French Meadow Bakery, many of which were dairy free.  For lunch we had a terrific selection of Pad Thai dishes from Big Bowl.

Wednesday we met as a combined group and in smaller groups for lots of discussion.  One really big concern that both Shirley of Gluten Free Easily and I raised was the issue of cross contamination with General Mills’ gluten-free products.  It was interesting to learn that although some of their products say “Made in a gluten free processing facility,” it is actually not a separate building but what was described as a dedicated environment (we did not see any of the processing facilities).  While they do test to 20 ppm, the proposed FDA standard, many people, including Shirley and my son, do react to their products.  Our suggestion, which was echoed by Carol McCarthy Shilson, was to enroll in the Gluten-Free Certification Organization program.  We tried to impress on them the fact that it is a matter of trust.  We need to feel safe about eating their products, and if we can’t do that, then their involvement in the gluten-free community will be hindered.  While nothing could be promised by the people there, we were at least encouraged by their willingness to listen and their openness to criticism.

We ended the day by doing a little baking in the Betty Crocker kitchens.  We broke into groups of two or three and prepared desserts from recipes they gave us using their gluten-free dessert mixes or the gf Bisquick and other ingredients.  I got to work with Cinde of Gluten-Free Taste of Home.  It was a fun experience, though those of us who are gluten free (some of the bloggers are not gluten free themselves but have a gf child or spouse) did not feel safe eating the products because of the wooden spoons, rolling pins, and spatula handles that could easily harbor gluten.  It was a learning experience for General Mills!

All in all, it was a wonderful, though very full and tiring, trip.  I’m still catching up from being gone two days.  I loved meeting everyone involved, but I was especially happy to connect with the other bloggers there.  They included:

I will have more to share with you in the months to come.  In the mean time, you can stop by the General Mills gluten free website, Live Gluten Freely for recipes and more.  Also, be on the lookout for another General Mills giveaway.