I’m sure you’re wondering what a gluten counter is. Well, it doesn’t count gluten. It refers to a kitchen type counter top and a cabinet as well. Here’s how it started…

When I was first diagnosed, my husband and I cleaned out our small kitchen. He still distinctly remembers purging my cabinet of wheat flour as if it were a highly toxic substance. However, my kitchen still contained some gluten. Since I was the only one who had to eat gluten-free I decided that the rest of the family could have their cereal and breads for breakfast and lunch, but dinner would be gluten-free. If I make breakfast for them, such as pancakes, it is also gluten free. Basically, I don’t handle wheat. About the only exception I make on dinners is when we are having hamburgers. They are allowed to put their burger on a regular bun. Any other time we have bread with dinner it is gluten-free.

So where does the counter come in? Well, I found that I was having gluten reactions more frequently than was acceptable, and the gluten counter was our solution. T 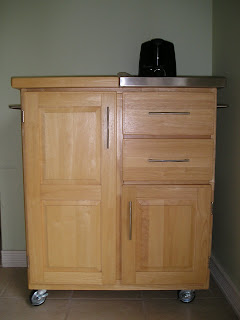 he gluten counter we had at the time was a moveable serving cabinet. It had a counter like surface on top with drawers and cabinet space below. Because my kitchen was small, this was placed in the dining room, and all the gluten containing food was put into it. A toaster for their bread was put on top, and that was where they fixed their sandwiches, made their toast, etc. This kept the crumbs off of my counter tops and away from my food. I noticed a big difference in how often I was getting sick, so we have continued with the gluten counter to this day.

I now live in a house with a larger eat-in kitchen. We have gotten a new gluten counter which sits against a wall at the end of the room where the table is, far from my cooking/food preparation area!

Maybe a gluten counter is just what you need, or maybe you already have one. I’d love to hear from you and find out.

« Gluten-Free Pancakes
In Praise of the Whisk »