I’m not good a decorating. I don’t have a natural talent for it, and I hate spending lots of money on something that just hangs on the wall. However, I do want our home to look nice, and I prefer to not have totally bare walls. As a result, I have come up with a few inexpensive decorations over the years.

When I wanted something to decorate a long stretch of soffit in our kitchen eating area, I decided to go with a bird theme. I bought a box of note cards. Each card has a different bird on the front. I then bought some inexpensive frames at Ross or somewhere similar. If you look closely, you can see that the card is a little smaller than the frame on the sides. I suppose some matting would take care of that, but like I said, I’m not a decorator, and it’s hardly noticeable when they are high up on the wall. I don’t remember how much I paid for the cards and the frames, but it was relatively inexpensive. 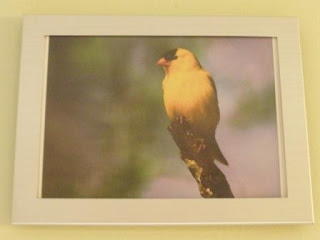 Here is a picture I bought years ago at a yard sale for a few dollars. I did replace the frame at some point. 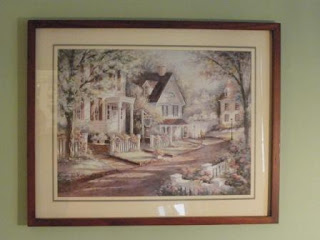 Here is a picture I got from my local freecycle group. It was free! 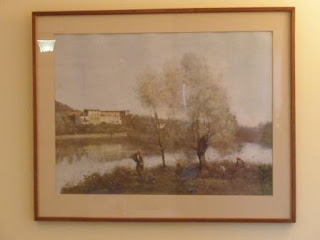 These wall plaques I bought at Kohl’s when there was a good sale and I had a coupon. They were pretty inexpensive. They are small so they look nice in bathrooms or other small areas.

I have a fruit theme in the cooking area of my kitchen. Inexpensive plates like this can be found at thrift stores, dollar stores, and yard sales. Maybe you’ll even find a plate hanger to go with it. While this one isn’t anything fancy, it helps fill in some space.

A few other ideas: