This week’s edition of “What can I eat that’s gluten free?” has a breakfast theme.  But don’t worry, if you have a different type of post to link up, that’s fine too.  If you’ve never participated before, please read the guidelines here.

A couple of years ago my husband was on a business trip and staying at a hotel.  A couple of their French customers were also there.  One morning he told the lady from France that she should try the French bread because it was really good.  She ended up explaining that in France it is called lost bread because they use bread that is old and bad–lost to all other uses.  When she learned that we use perfectly good bread, she gave it a try and was pleasantly surprised.

As a gluten-free baker I often have lost bread.  Not because it is old, but because it is too dry or too wet and has sunk in the middle.  I don’t let it go to waste, though, and French bread is one of my favorite ways to use it.  Here’s an example of French toast made from one of those sunken loaves. 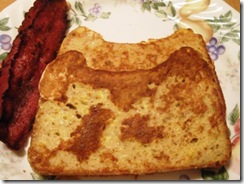 I don’t have a recipe.  I just mix some egg, milk, salt, and sometimes cinnamon in a bowl, dip slices of bread in the mixture and fry it on a skillet.

A few of my other breakfast recipes are: